It’s been 7 weeks. 7 weeks of mostly good times. My life is like a pinata, its full of good stuff but there is some crap surrounding it as well. I am constantly winding up with my Louisville Slugger…

5 weeks ago, I went to Japan-  Osaka, Kyoto and Tokyo.

Japan was easily the most Japanese place I’ve ever been.

I remember when I was nine years old, I was watching ‘The World this Week’ (the best news show of all time and the only English one in India circa 1989) and there was a story about how gates in Japanese schools shut automatically at precisely the same time each morning. So, if you were supposed to be in school at 8am, you better be there by 7:59 because at 8am those gates would close in. One morning, a young girl tried to beat the gates and they closed on her. Killed her. I decided there and then that I would never go to Japan or any place that kills you for being late. In my mind, it became symbolic of a robotic society where individuality and personality were squashed and machines and numbers ruled. It’s odd but so often, my point of view is dictated by something from my childhood. And even more so, it is influenced by a third party. I decided Japan was the pits because of an isolated incident as reported by Prannoy Roy.

It took the movies to change my mind. If you know me, you know that I am loopy enough to be convinced of something by a news source and then completely unconvinced by a movie. Yes, ladies and gentleman, my own research rarely enters the equation. State your case well and you’ll have me on board. Of course, for how long is uncertain…

Around five years ago, I saw Lost in Translation and Kill Bill and that was enough. Japan looked vibrant and fun and I imagined pink-haired girls sashaying into school late and sticking their Hatari Hanso swords into the electronic gates, full on fashionistas lovin life and leavin a trail of dead, decapitated bodies in snowy rock garden after snowy rock garden. I have problems compartmentalizing.

The Japan I would eventually visit could never live up to the Japan I imagined. But it did. That’s what surprises me. I have a stylized dream scenario of every place I go to and most times the place doesn’t live up to it. It’s great. It’s nice. It’s just not the  Shangri-la I dreamed about. But Japan was nice. Somewhat different from what I expected but it surpassed my hopes which were implausibly high. If I were to describe it, I wouldn’t do it justice. It’s intangibles that I can’t express. Besides, I would rather you go with a blank canvas than with mine. You will get more out of it that way. However, I will say this much – the country is probably not as expensive as you think and the Japanese are nicer than you could ever imagine. Simply an amazing people.

Japan ended and I found myself back in the K. Although I missed Japan, the weather in Korea has been good and I have been enjoying myself. The biggest news was the arrival of my old school friend / victim from younger days-  Rap came over from Germany for 2 weeks and it was great. She read a book about Korea and constantly filled me in on the country I have been living in for 9 months now. For instance, when we went to Gyeongju (the ancient capital of Korea) she told me all about a famous bell there. As the bell gonged, Rap said to me “Ooh that’s the bell. Legend has it that when this bell was made during the days of the Silla dynasty, they killed a girl and put her blood into the metal they used for the bell. Now, when you hear it ring, if you listen closely you can also hear her blood curdling scream.” She said this in the most dramatic way possible. I got chills. It made me thank the Lord that Rap had never told any ghost stories when I was a boy. Anyway, you can imagine how awesome it was to have  nuggets like this coming at me constantly.

Anyway, so I am now 9 months in, it feels like a short time but I guess it’s been a while.  I feel like I officially live here, this is longer than any vacation. I still enjoy it out here. I keep thinking about whether to move out of the K  but I don’t know why I would or where I would like it better. For the time being , this feels like home.

If I was a blues guitar player, I would play on the streets in N’awlins. I would band some hard drinkin’ friends and we’d jam nights. Not a whole lotta talk. Lotta music. But, then if you took us and put us in a cutting edge studio, I’d feel like shit. I’d sit at the mixer with the knobs and the sheet music and I would want to kill myself. It would all be a little too clean for me, a little too bland. Too organized, polished and clinical. I am not a fan of places like that. Or people like that. 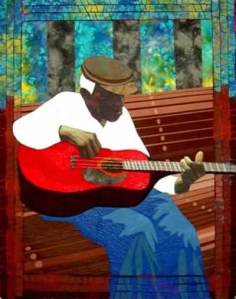