Me (Too Much Information)

Without any humour or irony , I  say to myself quite often  “When I grow up, I’m going to ________”. I said it when I met a gentleman on a plane and I wished one day I could be like him, the kind of man who can take over a ten hour flight and make it better for each person on the plane.  I say it when I see someone  making a difference and think one day I will be like them.  When I see someone really nasty at some sport. Hell, I even say it about things as unimportant and unimpressive as whistling loudly with fingers in my mouth.

One day, when I grow up, I’m gonna whistle loud as hell! In each instance, I take the trait or characteristic I appreciate and I apply it to my future self. This future self will be the savior of the human race, you know. He would have to be! Imagine taking this superb mess I am right now, smoothing out the rough edges, putting in some new trim and polish, with a few tricks to boot! I would be downright presidential. Kennedy-esque.

However, lately, I am beginning to think that the 35-year-old me will not be quite what I imagined when I was nine years old. When I was a kid, I distinctly remember thinking seventeen was over the hill. I really pitied the teenagers at my bus stop with their acne and weird hair growing on their faces. I thought by the time you approached thirty, you just stationed yourself in a rocking chair on the veranda. In my wisdom, I figured that all that “Life” stuff happened in your 20s and that in that decade one would:

In my early teens, I thought that EVERYBODY knew what they were going to do for a living by eighteen. I had overheard guys  say things like “I’m in engineering college” and I would imagine them overlooking sites while studying blueprints in their yellow hard hats. Yes, those corner shop drunks would be the architects in charge of the new millenium’s Taj Mahals and Eiffel Towers. I would lay in bed at night, gripped by fear, thinking to myself  “Wow, I can’t believe these clowns are going to build structures that people are going to walk into.”

While I thought the 20s would be the Golden Age of romance, by the time the 20s came, I realized that the Golden Age was actually the teens. Romantically speaking, your teens have all the good things of your 20s without any of the bad. For example, if your girlfriend accused you of being immature, her accusation would have less merit in your early teens as opposed to when you are kicking thirty’s door down. Also, all the sneaking around and secrets that you have to keep from your parents make the whole thing that much hotter.  Ironically, even with the complications of high school and what not, romance was infinitely simpler and purer in teenage years. For example, just think of Kevin Arnold’s love lockdown for Winnie Cooper. Although just another horny teen, he was adorable! During one’s 20s, one tends to overthink it…or not think through things enough. Our little baby’s all growns up!

3) Put down roots some place.

I don’t mean just to live somewhere. I mean roots as in if you were in India, you could forget your wallet at home and go eat a meal fit for a king. You eat. You drink. You get dessert.You wouldn’t be able to pay or tip and nobody would hate you for it. Next time, yaar. If you were in the States,  it’s when you walk into your diner, they know which booth you want. The little things are the big things. Sometimes you wanna go where everybody knows your name…

This one was my favorite. I really looked forward to this and it’s tragic in some ways that it never happened. In my teens, I was genuinely excited about the prospect. I thought I would become all those things Kipling describes in his poem “If “. And that was just for starters. After proving I could fill the unforgiving minute with sixty seconds run, then I would proceed to walk the tightrope between good and evil. Always being too nice to be evil and too “cool” to like the goodie-goodies, I was magnetically drawn to the male figures in my life who found the perfect balance between the two. James Bond. Cool Hand Luke. John Lennon. Bob Marley. Siddharth.  Righteous, but not corny. Oh Yes. When I grow up, I am going to be _________ ! And I am going to always _______ ! I will find the perfect balance between everything and become the prototype for a new better MANKIND. I had a clear vision…

Teaching is a funny thing though. It really reminds you what stage of your life you are in. In my previous job at a middle school, my students were all born between 1994 and 1996. That used to freak me out because I clearly remember those years, them being the best time of my life, my own schooldays. I used to imagine a Korean woman telling her husband she is pregnant while at the exact same moment I am in India discovering what Rum tastes like.

NOW, in my new elementary gig, these kids are born between 1998 and 2002. Two thousand and two! That’s after 9/11! That’s after the Sydney Olympics!  That’s after Gladiator came out! I imagine a Korean woman telling her husband she is pregnant while at the exact same moment I am driving around New Jersey listening to 50 Cent on the radio. GO. GO. GO SHAWTY…

So, talking to these scamps nowadays, I’ve come to the point now where I am dangerously close to saying “When I was your age…”

When I was your age…

1) We didn’t dye our hair orange and all this other metrosexual nonsense. We got a haircut and that’s it!

2) We didn’t listen to crap music. We listened to the classics. Guns N Roses and 2pac, Madonna and Michael Jackson, Oasis and Aerosmith.

3) We would have never bought into this HARRY POTTER rubbish, the Rockys, Die Hards and Terminators were good enough for us. And they taught you how to be a man.

Which I guess I am now.

It certainly doesn’t feel like it. I haven’t done any of the things I thought men had to do. It would be interesting if there was a video game called MANHOOD and you had to pass all kinds of tests and rise to challenges and beat the bosses at the end of the levels (They would be your school bully, your jerk boss, psycho romantic interests, general barometers of life) But, having no blueprint, I guess some people find out they are men when they realize they are no longer boys. When you stop saying “When I grow up…” and start saying “When I was your age…” , you’ve probably arrived. 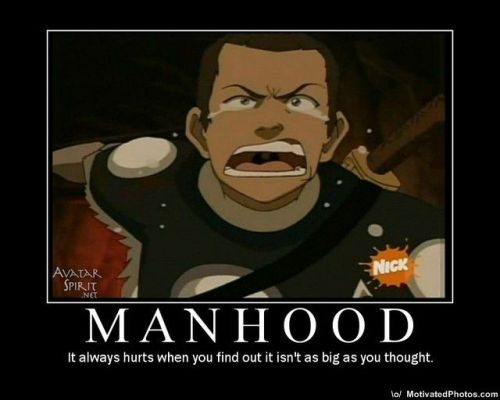 2 responses to “All Growns Up.”