Words and Photos by Siddharth Chander 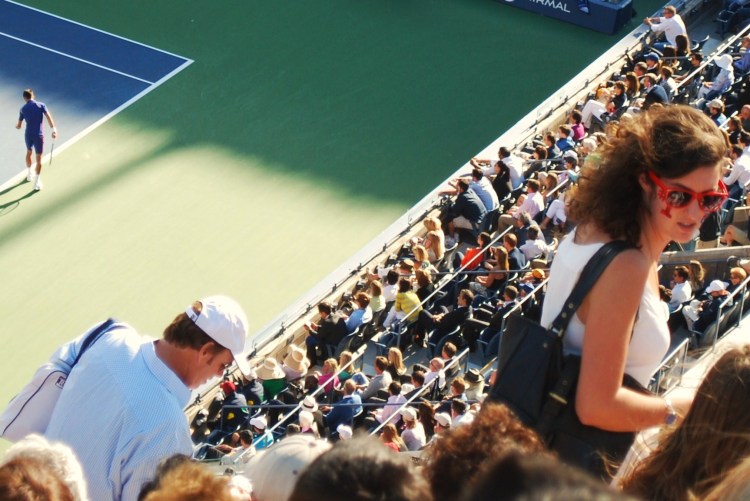 The Arthur Ashe Stadium located in Flushing Meadows in the Queens borough of New York can seat up to 22,547 people. It is easily the largest tennis venue in the world. When I visited the stadium on a perfect summer’s day this past autumn, there were about a quarter of that number in their seats as I arrived. Still I had no doubt that every last seat would be full. For in addition to that gargantuan number, two additional people would be at the stadium that evening. They were according to their ranking the second and third best male tennis players in the world, Serbia’s Novak Djokovic and Great Britain’s Andy Murray respectively. They were playing for the last Grand Slam title of 2o12, Andy playing for his first taste of a Slam and Novak the defending champion playing to keep that taste all to himself. 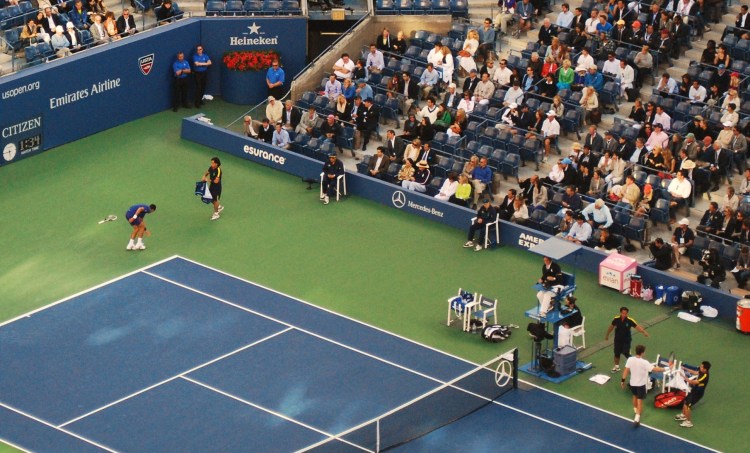 Riding the 7 train out to the stadium, the subway car was the biggest collection of tennis fans I had ever seen. What’s a tennis fan look like? Well, in everyday society, one may occasionally see someone wearing a hat bearing a regal RF on it, but on the way to the US Open you will see it in every colour under the sun including ones that would make Roger Federer himself cringe. Now, I can honestly say that Roger Federer was my favorite tennis player before he won a single Grand Slam so I feel like I am one of the stalwarts in the Roger camp. But when I got on that train, I knew I had underestimated the popularity not only of the Fed but of tennis in general. People flew in from all over the world for this thing. Trying to gauge what direction the crowd was leaning, I asked the man across from me (branded by the RF) who he wanted to win. I was pulling for Andy, not because I liked him or disliked Novak in any way. I simply felt Andy had paid enough dues to (I hate the word but) deserve a Slam. (Deserving something is a funny concept because it’s a completely subjective abstract thing. I once saw Gregg Poppovich of the Spurs say in a post-game interview seconds after his team got screwed by a referee’s botched call that his team “can’t start thinking about deserve. There is no deserve. There’s what you got and that’s it. You start thinking about deserve and you get soft.”  He said the two of those words with such disgust that I don’t think I’ve ever thought I’ve deserved a thing since. That Poppovich could be a Life Coach.) 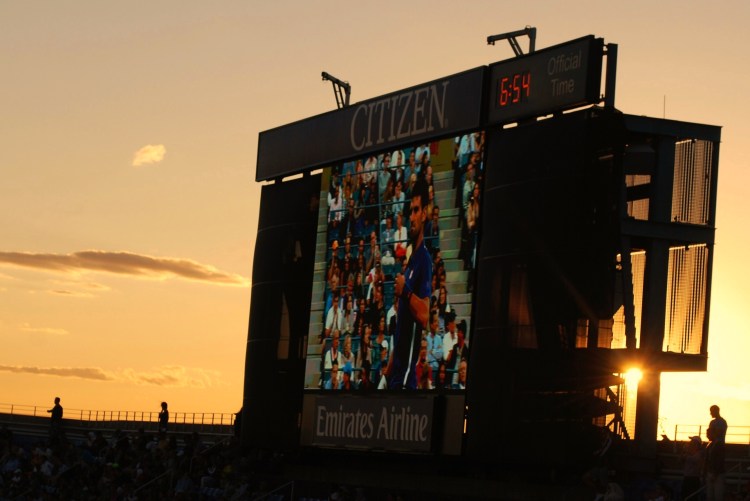 The man wanted Novak to win. This led to quite a few people saying they wanted Novak. I was surprised but Rafa and Roger being my guys, all I really wanted was 5 sets. I said as much and there was unanimous agreement on that. Now all that was left was for these two young men to deliver the goods to those twenty-two thousand. Talking to the hardcore tennis fans on the way, the conversation kept coming back to Roger and I realized Federer is to them a savant, a genius, a once in a lifetime phenomenon. There is no criticism they accept. Roger is one of my favorite athletes but to criticize him in any way was sacrilegious even if I offered that he was the best. I liked hearing it. I enjoyed meeting people so passionate about tennis that they would argue a failing argument to the death. The truth, another abstract subjective notion? 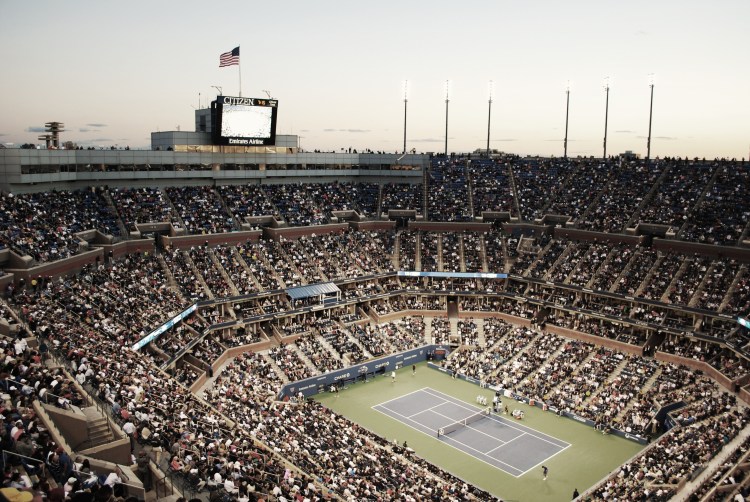 Walking into Arthur Ashe is incredible. I’ve been lucky enough to attend a game in most pro sports and nothing has been superior to the two matches I’ve seen at Ashe. In my opinion, tennis is simply the most intense from a viewing standpoint. You have two men standing alone. No teammates. No coaches. Nowhere to hide. Most sports offer moments when an athlete can get a break, whether it be when his teammate takes the heat off him or whether the ball is simply far from him. In tennis, and in Arthur Ashe, the players can’t escape for a moment. You see their every move from the first second they walk out onto the court. You see them warm up. You see them when they rest in between games. You see every inch of them on every single point because there is no other body that will ever obscure your view. They are all alone. John McEnroe compares it to Boxing, saying two men walk out on their own, take their respective sides and then attack each other until one emerges victorious. The size of the stadium completely lends itself to this Gladiator analogy because after 4 hours of watching Andy and Novak battle, it really felt like one of them would have to kill the other to walk out of there. 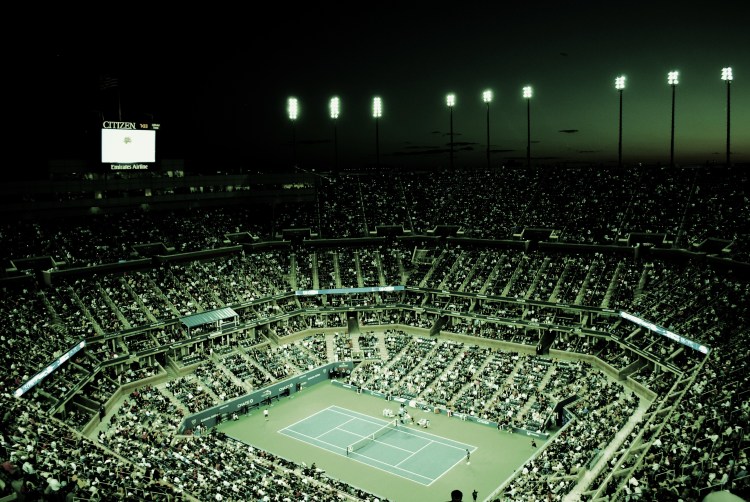 One aspect of a tennis match that is unique is the silence of the crowd while a point is in play. This increases the intensity by tenfold because you clearly hear the grunt of the player, the thwack of the ball off the racquet, the squeak of their sneakers on the court. The echo reverberates through the air when a player lets out a yelp of anguish after he has mishit a ball or been run ragged in the pursuit of winning one solitary point. All the adrenalin builds up in you silently during a particularly long point and then when it finally ends, you release the emotion via a clap or a shout and then it’s silence again. This process repeated intensifies the entire evening. A good crowd becomes one collective mass and an integral part of the match.

Which is why I wanted to attend a Final. From the time I was a child and began watching tennis, that moment of winning a Championship seemed magical. One would watch the world’s best transform in an instant from stoic squinty-eyed robots into puddles of emotions and bundles of nerves with an opponent’s final backhand hit just long or a forehand that found the net. That moment when you become a champion. And none more special than the first time. Maybe the seed was planted with that old Archie’s Gallery ad featuring a guy striking out with a girl – until he saw a poster of Bjorn Borg celebrating his Wimbledon title by falling to the grass with his eyes closed and his hands to the skies. 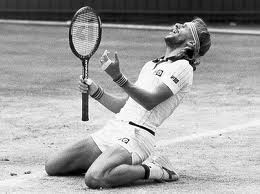 The aspiring Romeo falls to his knees and wins Juliet forever. I’m telling you, that moment stays with people. I got chills when the umpire said it: Championship Point. I knew I had pulled for Andy. Was it subconsciously because I had a chance to be there for that moment? When he would break through, when twenty odd years of hitting balls would be everything him and his fans hoped it would be? I was only pulling for Andy because Roger was ousted earlier and Rafa was out with injury but in that moment, you wanted him to win it so badly. I just kept wondering how he would react. It was the 5th hour and 5th set of the match. It had seen everything. Momentum turns. Raucous tie breaks. A 55-shot rally. Wind gusts that blew the ball around like a candy wrapper. Cramps. Bathroom breaks. Physical therapists. The bright afternoon sun had given way to a gorgeous sunset which had given way to a clear night under the bright stadium lights and airplanes coming to and fro LaGuardia Airport. 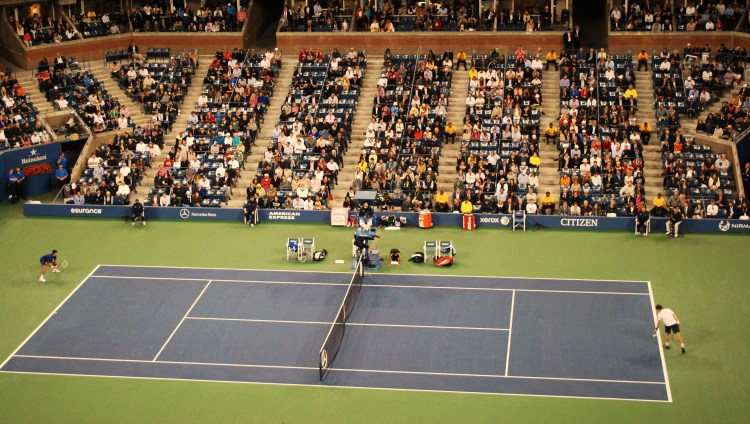 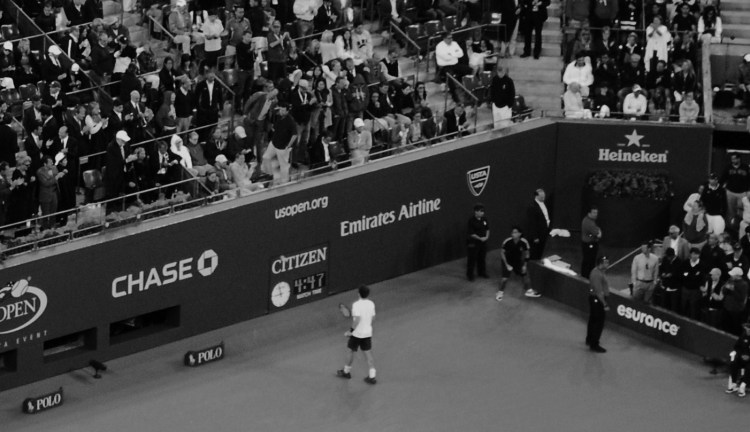 In the 5th set, Andy managed to get his second (or third or sixth) wind just as Novak began to cramp and fade a bit. As Novak was treated  in his chair, Andy Murray who had already been labeled the best player to never win a Slam walked over behind his baseline and volleyed against the wall to stay loose. 4 hours and 47 minutes had passed. Everyone in the Stadium believed in that moment he was going to win his first Slam in a minute or five or another thirty. But he was going to get it. How would he celebrate? Was he thinking of that as he volleyed and waited for his hobbled opponent to return to his feet? I thought he had to be but he said later he wasn’t. 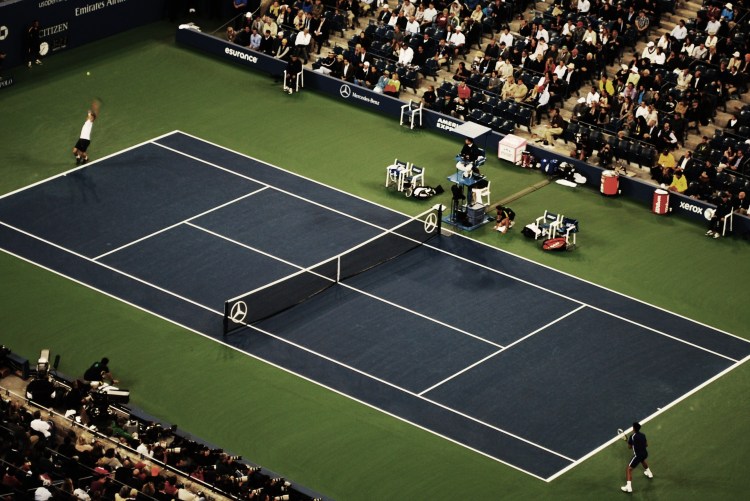 Novak saved the first championship point with a forehand winner. On the second, Novak brazenly returned Andy’s serve with a blazing forehand that was either going to be a sure winner. Or that moment for Andy Murray. And so it was. At the end of one of the longest Finals in Grand Slam history, the first time Champion dropped his racquet, held his hands over his mouth in disbelief, went into a squat for a second and that was that. It’s unbelievable. You work your whole lifetime for that moment and it passes before the ball even comes to a stop. 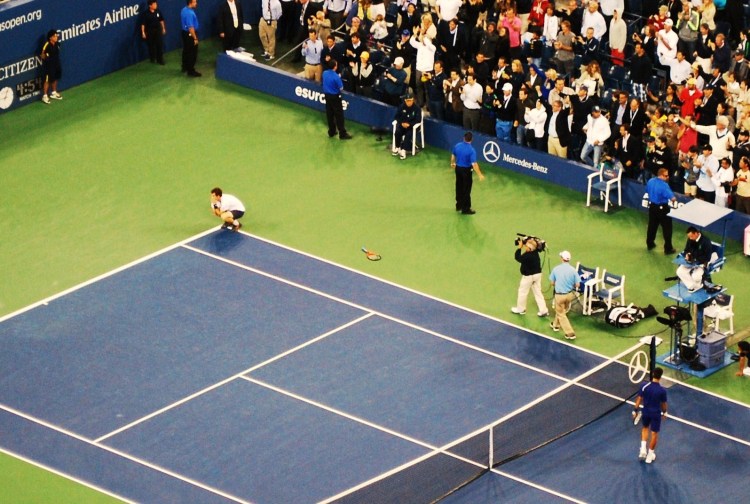 2 thoughts on “Andy Vs Novak: That Moment”